You have a running NTP server with a static IP address? What about joining the NTP Pool project by adding your server to the pool? You will give something back to the Internet community and feel good about it. ;)

It doesn’t matter if you’re running a Raspberry Pi with GPS/DCF77 on your home, or a fully-featured NTP appliance such as the ones from Meinberg on your enterprise DMZ. Just a few clicks and your server will be used by the NTP Pool’s round-robin DNS. Here’s a simple tutorial:

If you do not have an NTP server yet, follow my setup guides for the Raspberry Pi to build one, either for GPS or DCF77.

You don’t need that much bandwidth for this project at all. At least a 1 Mbps ISP connection fits. You can configure the net speed at the pool to match your bandwidth. I myself used four independent IPv6-only NTP servers with a configured net speed of 10 Mbps each, which resulted in only 1 packet/second on average. [Ref: Stats from Participating the NTP Pool Project] You can really handle that. For official information from the NTP Pool project click here: How do I join pool.ntp.org?

That’s it. From now on you will receive NTP queries from all over the world, while focused on your zone. For example, my NTP servers in Germany are in the @, europe, and DE zones. 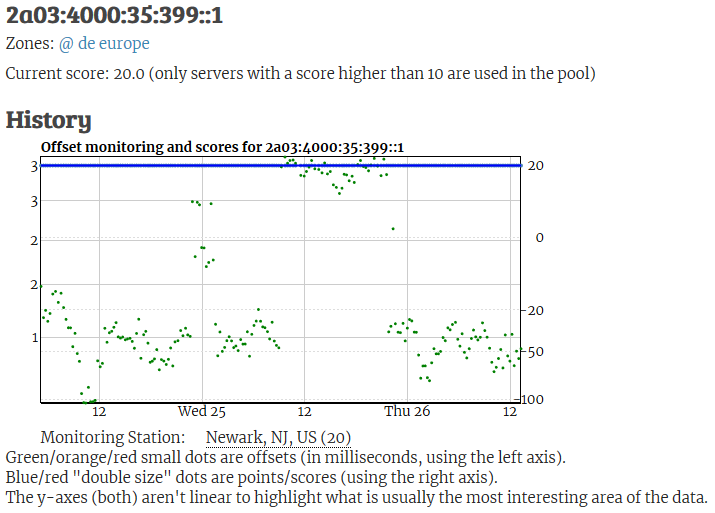 Keep an eye on your score to eliminate any potential errors. However, keep in mind that the scoring system is not that sound as pointed out here: Stats from Participating the NTP Pool Project.

In the end, it’s good for the Internet community to have more NTP servers within the pool. As a private person, you are probably using the pool for many years without even knowing it, such as from your home router, IoT devices, etc. Good to be a part of the NTP Pool from the other side as well. ;D

Featured image “Pool with a view.” by david is licensed under CC BY-NC 2.0.