I was interested in the performance of my FortiGate firewall when comparing IPv4 and IPv6 traffic. Therefore I built a small lab consisting a FortiWiFi 90D firewall and two Linux clients running iperf. I tested the network throughput for both Internet Protocols in both directions within three scenarios: 1) both clients plugged into the same “hardware switch” on the FortiGate, 2) different subnets with an “allow any any” policy without any further security profiles, and finally, 3) activating antivirus, application control, IPS, and SSL inspection.

Both clients (notebooks) booted with the live Linux Knoppix in version 7.6.1. The FortiWiFi 90D ran at software version v.5.2.5, build701. The security policies for tests 2 and 3 looked like that:

I started iperf on one of the notebooks in server mode (with either IPv4 or IPv6),

A complete run of iperf is listed in the following:

Here is a screenshot of the FortiGate Traffic Forward log that shows some IPv4 and IPv6 runs: 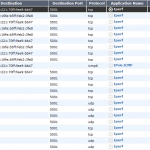 These are the results:

Of course, these results are only true for this single FWF-90D firewall. It only has an NP4-lite processor which is not capable of IPv6. Bigger firewalls with the newer NP6 claim that they have the same speed for IPv4 as for IPv6. Hopefully they will. The measured IPv6 throughput with this firewall is obviously not that good!