When implementing new firewalls at the customers’ site it is always interesting to verify that the anti-virus scanners etc. are running as expected. For simple virus-engines, a sample virus such as the EICAR anti-malware test file can be used. If this “virus” traverses through the firewall inside various protocols such as http, ftp, or smtp, the firewall must block this connection.

However, next-generation firewalls or any other APT (Advanced Persistent Threat) solutions are able to send unknown executables to its own cloud in order to test it. If a malware is found, these products can block future connections with these files, e.g., by updating the anti-virus patterns or their URL categories.

The problem is: How to test whether the “upload unknown files” function works properly? -> My idea is to have a server that generates “dynamic” viruses. When downloading such a “fresh generated” virus, the antivirus engine does not have a pattern for it. That is, the file must be uploaded to an APT solution. The logs on the firewall should list this upload process.

This could be the process:

Here is a quick-and-dirty sketch:

To my mind, it is not easy to generate “fresh malware”. But since the bad guys are doing it all the time, it should be feasible.

I do not know whether such a system is already present on the Internet. Maybe? If someone knows something about such systems, please write a comment. Or this might be a good topic for a project thesis for students. ;)

An even more interesting test case would be a “malware server” that generates dynamic malwares with a callback to itself. A logfile on the server would reveal whether the test malware really called back. That is, a user could test whether an APT solution a) recognizes and b) prevents callbacks. The scenario could be similar to the above one:

And a sketch for this process, too: 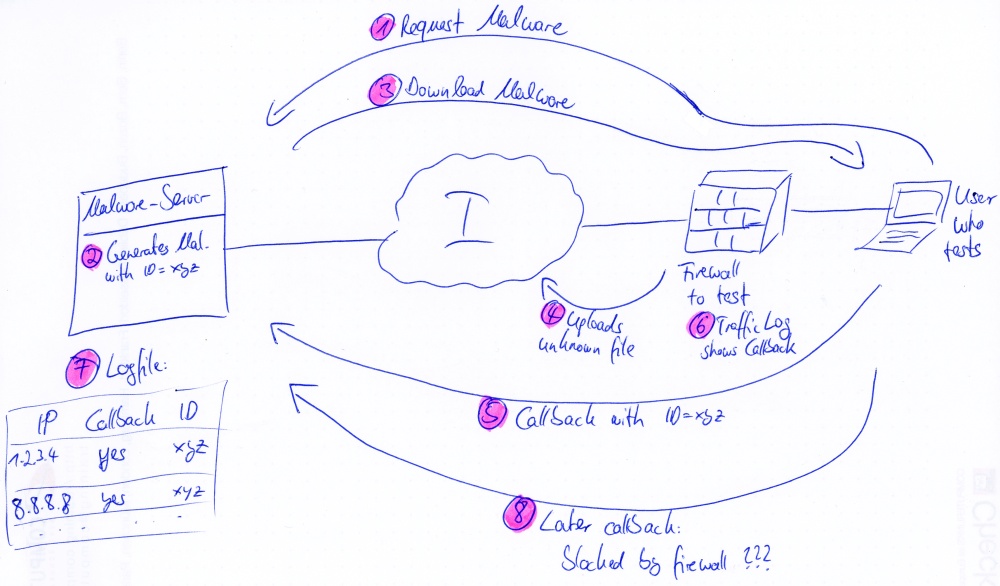 Okay, maybe this idea is a bit oversized. However, I think a method to show the customer that his machines are working as expected would be great.