In the legacy IPv4 world, the DHCP server allocates IPv4 addresses and thereby stores the MAC addresses of the clients. In the IPv6 world, if SLAAC (autoconfiguration) is used, no network or security device per se stores the binding between the MAC (layer 2) and the IPv6 (layer 3) addresses from the clients. That is, a subsequent analysis of network behaviour corresponding to concrete IPv6 addresses and their client machines is not possible anymore. The mapping of “identity to IP” is not done automatically somewhere.

A simple way to overcome this issue is to install a service that captures Duplicate Address Detection (DAD) messages from all clients on the subnet in order to store the bindings of MAC and IPv6 addresses. This can be done with a small Tcpdump script on a dedicated Ethernet interface of a Linux host.

In this blog post I will present a use case for storing these bindings, the concept of the DAD messages, a Tcpdump script for doing this job, and the disadvantages and alternatives of this method.

A customer wanted to test IPv6 in order to achieve knowledge for the IT admins. We decided to activate IPv6 on the guest/BYOD Wifi. In this way, many users and clients will operate with IPv6 without touching the productive LAN. One of the first questions in this scenario was: How can we know which device had which IPv6 address at a given time? How can we trace back which device (user) has done some malicious actions when we only see many different “privacy extended” IPv6 addresses in the firewall log without any MAC addresses?

Since we had no layer 2 switches that support first-hop security services such as neighbor discovery monitor or router advertisement guard, the idea was to use a host on the local network to sniff and “search” for new IPv6 addresses and their correspondent MAC addresses.

Every IPv6 node on the network that wants to register a new IPv6 address must run the duplicate address detection (DAD) method in order to find out whether this IPv6 address is already used by another IPv6 node: “Duplicate Address Detection MUST be performed on all unicast addresses prior to assigning them to an interface, regardless of whether they are obtained through stateless autoconfiguration, DHCPv6, or manual configuration, […]”, RFC 4862, Section 5.4. This ICMPv6 neighbor solicitation message is sent to the solicited-node multicast address of the target address. (Remember: There are no broadcasts anymore with IPv6.) However, since common layer 2 switches do not maintain multicast listener groups, they simply forward these messages to all switchports. That is: Our sniffing Linux host will receive all DAD messages that appear on the local network. 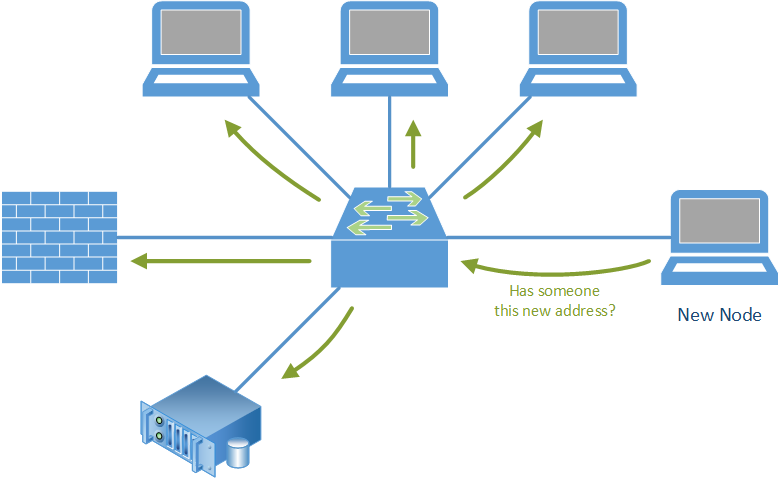 Here is a Wireshark screenshot of a DAD message. The Ethernet frame is sent to an IPv6 multicast address (beginning with 33:33:) with a source MAC address of the IPv6 node, in this case an Apple device. The message has ICMPv6 type 135 and a “Target Address” of its tentative link-local IPv6 address (fe80::…):

The Tcpdump line for the same DAD message looks like that:

I am dividing my method in two sections: At first, a Tcpdump runs in the background in order to store all DAD messages in a *.pcap file. For the subsequent analysis, the stored *.pcap file is read into a textfile which can then be analysed using grep, etc.

For the capturing of IPv6 packets I recommend to use a second hardware interface on the Linux host which does not participate at layer 3 at all, i.e., has no IPv6 addresses: sudo sysctl -w net.ipv6.conf.eth1.disable_ipv6=1 . That is: It is only used for the passive sniffing on the network.

Creation of the Pcap File

The DAD messages can entirely be classified since they are “Neighbor Solicitation” ICMPv6 messages of type 135 (RFC 4861) and are always sent from a source address of “::” (RFC 4862). That is, the following Tcpdump filter captures only DAD messages: ip6[40]=135 and src host :: .

I am storing the logfiles in a subfolder under /var/log: sudo mkdir /var/log/dad . The complete Tcpdump command which uses the second interface card on the host and creates a new *.pcap every day looks like that:

Since new pcap files are created after 24 hours, the program “mergecap” can be used to concatenate them to a single file. This gives a wider range for the searching of addresses. The following command merges all pcap files from the /var/log/dad/ folder into a single file:

In the next step, tcpdump is used to read out the file and to write it into a textfile. I am using it with three more options:

Here is a sample output of this textfile. Among others it shows the date and time, the source MAC address, and the target IPv6 address.

Now, its fairly easy to find an IPv6 address. Simply use grep such as:

This output shows the MAC address of the client and the times it sent out a DAD message, which happened a few times during the 06. and the 09. of January.

–> At this point, the mere ideas of monitoring MAC-IPv6 address bindings are complete. However, with some basic Linux tools the gathered information can be presented a bit better:

To only show the date & time, the MAC and the IPv6 address, “sed” with a few regular expressions ( sed s/regexp/replacement/ ) can be used to eliminate all other pieces of code:

This gives a kind of table which shows all MAC addresses on the network that requested an IPv6 address.

For a better structure of this table, “sort” and “uniq” can be used to sort the table based on the MAC addresses and to omit doubled entries. That is, the following table shows for each MAC address all requested IPv6 addresses, sorted by MAC address and by time:

Of course, a MAC address can be grepped in the logfile to show its corresponding IPv6 addresses, too. If it is used in conjunction with the above mentioned sed, sort, and uniq pipes, a sample output looks like that:

The way of using Tcpdump as a network sniffer is more a proof-of-concept than a real solution for enterprises. It might fit for a guest Wifi but not for productive environments.

Disadvantages of this Method

With this post, I showed the basic functionality of the duplicate address detection messages and how they can be stored to maintain a list of MAC-to-IPv6 address bindings on a layer 2 network. This solution fits for small IPv6 networks (and might train the understanding of IPv6 at all), but is not meant to be used in security-relevant enterprise environments. Dedicated intrusion detection/prevention systems (IDS/IPS) and security information and event management (SIEM) systems should be used to monitor critical networks.

More information about this idea can be found at the following two blogposts: Reliability of IPv6 DAD Message Sniffing and IPv6 Address Statistics based on DAD Messages.

Here are a few links for further reading. Since my references for this article are always inline, I am only listing further links here: