What’s the first step in a networker’s life if he wants to work with an unknown protocol: he captures and wiresharks it. ;) Following is a downloadable pcap in which I am showing the most common NTP packets such as basic client-server messages, as well as control and authenticated packets. I am also showing how to analyze the delta time with Wireshark, that is: how long an NTP server needs to respond to a request.

As always in my “packet capture” blogposts you are invited to download the following pcap (zipped, 16 KB) and to open it with Wireshark to have a look at it by yourself:

This file consists of many different NTP packet types. Hence I am using display filters within Wireshark to have a look at specific scenarios. The standard UDP destination port for NTP is 123, while the source port *might* be 123 as well.

Have a look at the current NTPv4 RFC 5905 “Network Time Protocol Version 4: Protocol and Algorithms Specification” in order to understand the packets and protocol details. Looking on the wire you should understand the packet header (section 7.3 in the RFC). Note that I am NOT explaining the NTP algorithm at all, but only the packets and their fields that are present on the network. The most important fields are:

These variables are seen on the wire for NTP packets. Note that on any NTP server or client you have a couple of columns that are listed in many documentation and are NOT part of the packets but of calculations by the NTP algorithms. Those are when, poll, reach, delay, offset, and jitter. Have a look at the blogpost from Aaron Toponce “Real Life NTP” in which he describes these columns of ntpq (among other things). Or, of course, at the official ntpq documentation.

In my pcap, udp.stream eq 21 shows a basic client to server communication. An NTP client asks a server for the time. In the answer of the server, you can see its stratum (1) and reference clock (DCFa). Normally an NTP communication is ongoing over the lifetime of the ntp service running; it queries the server at the “poll” interval. You can see this behaviour in udp.stream eq 2 where my NTP server asks (as a client) another NTP server on the Internet. The polling interval, in this case, was 64 seconds, the stratum of the server was 2, while the reference ID shows the IPv4 address (or the first bytes of the MD5 hash of the IPv6 address) of the reference from the queried NTP server.

When you’re running multiple NTP servers connected as “peers” rather than “server” (refer to the ntp.conf manpage) in order to sync their clocks against each other, you’ll see symmetric active (mode 1) packets on the wire.  udp.stream eq 1 shows the peering between two of my stratum 1 NTP servers. 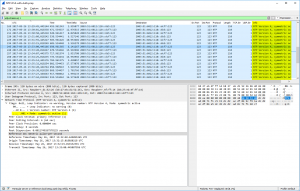 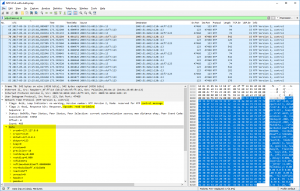 Due to my Wireshark bug report aka feature request “NTP Analysis: Delta time between Client-Server“, one of the core developers, Pascal Quantin, added the field ntp.delta_time in which Wireshark calculates the time between the client’s request and the corresponding server’s response (similar to the dns.time or http.time fields). You can see this calculated value in square brackets [as always for Wireshark-added fields]. Additionally, I have added a column in my Wireshark GUI to show these values, as you can see in this screenshot for udp.stream eq 2: 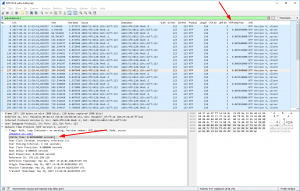 Furthermore, you can use the “IO Graphs” from Wireshark to display the ntp.delta_time for certain connections. In the following graph you can see the analysis of udp.stream eq 2 again, while the Y-axis shows the ntp.delta_time field. Since this particular NTP client sent an NTP request every 64 seconds, you can see those ticks in the graph, as well as one spike near 1040 seconds of the trace: 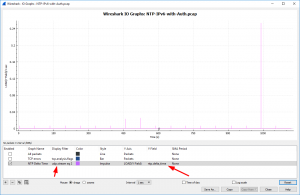 Yeah, that’s it for now. Have a look at your own network and verify the kinds of used NTP versions/servers/stratums/reference clocks/delta_times and so on. ;)

Featured image “Great White Shark” by Elias Levy is licensed under CC BY 2.0.