I am using an almost hidden FTP server in my DMZ behind a Palo Alto Networks firewall. FTP is only allowed from a few static IP addresses, hence no brute-force attacks on my server. Furthermore, I have an “allow ping and traceroute from any to DMZ” policy since ping is no security flaw but really helpful while troubleshooting.

Now, here comes the point: My FTP server logfile showed dozens of connections from many different IP addresses from the Internet. WHAT? For the first moment I was really shocked. Have I accidentally exposed my FTP server to the Internet? Here is what happened:

Let’s have a look at the FTP server log first (FileZilla Server). It shows many incoming connections while almost all of them aborted with a syntax error. However, a few sessions at least received the welcome message: 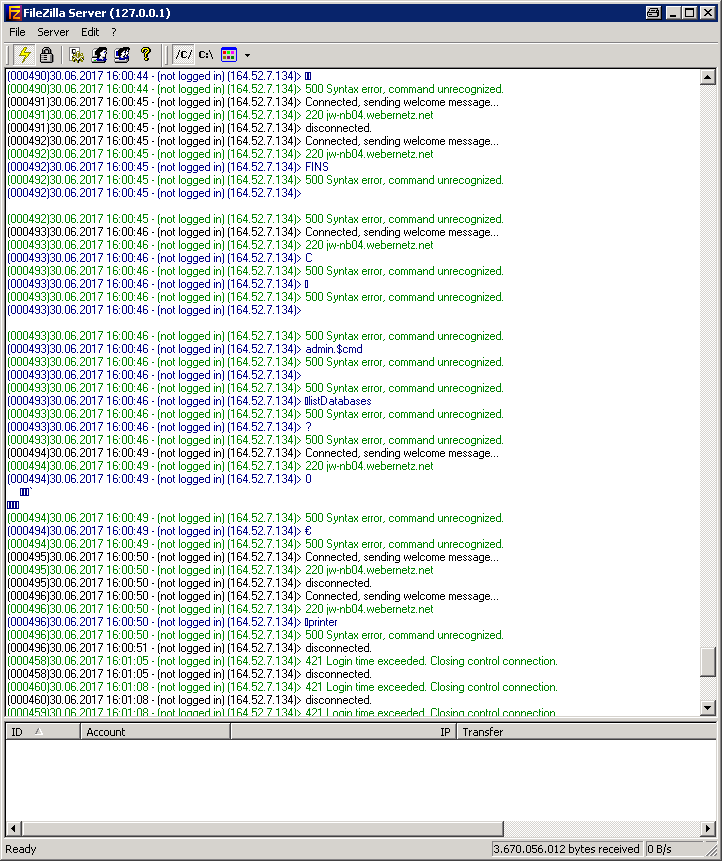 As I searched through my traffic log in the Palo Alto firewall I found that all of these connections were initially allowed by my “Ping from Untrust to DMZ allow” rule. Note that for all allowed connections the application was “incomplete” or “insufficient-data”. All connections in which the application was correctly identified as “ftp” or something else were denied, just as I expected it for *all* connections:

To have a complete view, this was my policy at the time of those events. I allowed the following four applications (due to application dependencies and the need for pinging over IPv6): ping, traceroute, icmp, ipv6-icmp. Service was set to “any” and NOT to application-default:

Well, the firewall can only recognize an “application” after some packets have traversed the device. Before this application data, it only sees the TCP SYN (which would fit for a traditional layer 3/4 firewall). Though I knew that, I did not merge this behaviour to my harmless-looking ping/traceroute policy. Since I allowed those four applications with service “any”, every single TCP attempt into my DMZ was allowed until the real application (such as telnet, ssh, web-browsing, snmp, …) was recognized and denied by the firewall.

Hm, is this good or bad? Well, in order to write policies based on applications rather than services/ports, the firewall must behave like that. That’s the core of those next-gen firewall with their application detection. The problem was my policy with service “any” and not “application-default”. Furthermore, the applications “icmp” and “ipv6-icmp” do not look that trustworthy at all. I am still unsure whether someone can send *any* kind of IPv6 ICMP message into my DMZ while I am only interested in echo-requests.

Just a few things to consider when writing security policies on a Palo Alto Networks firewall:

Note that all of this fancy application detection is not easy to understand at all. It is not that obvious as in those “source/destination IP address and port”policies in the (good?) old days.

Photo by Dmitry Ratushny on Unsplash.