We have run into an annoying situation: A hardware-dependent limit of user groups on a Palo Alto Next-Generation Firewall. That is: We cannot use more Active Directory groups at our firewalls. The weird thing about this: We don’t need that many synced groups on our Palo, but we have to do it that way since we are using nested groups for our users. That is: Palo Alto does not support nested groups out of the box, but needs all intermediary groups to retrieve the users which results in a big number of unnecessary groups.

I am asking you to give me some input on how you’re using user groups on the Palo. How are you using group filters? What count of AD groups do you have? Are you using nested groups (which is best practice)?

How we are using AD groups

On a Palo, the user groups are synced from the Active Directory (LDAP profile) within Device -> User Identification -> Group Mapping Settings. The “Search Filter” limits the groups. In our case, we would *only* need our firewall groups. The “Group Member” attribute is set to “member” by default: 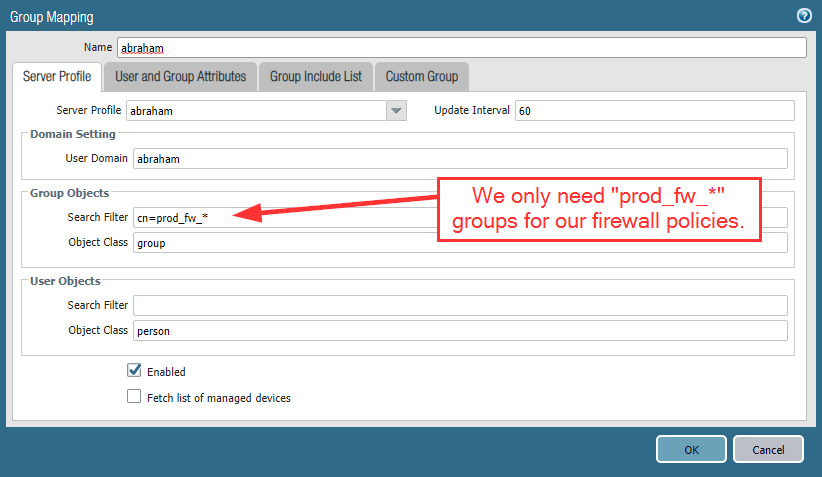 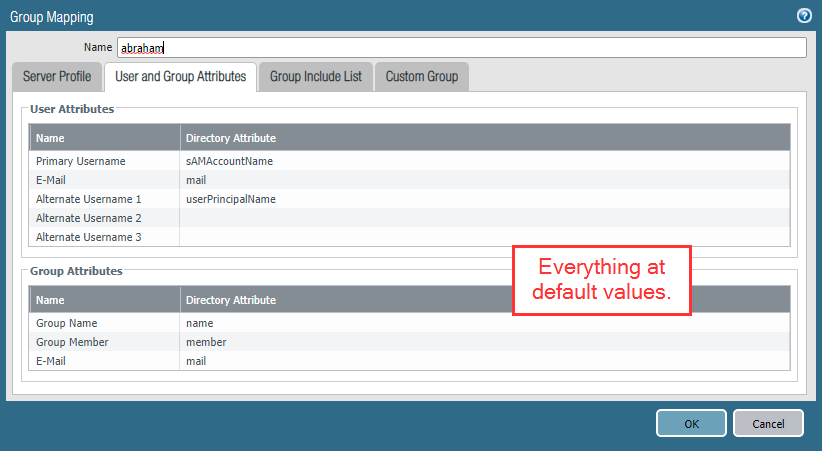 Using this setup, we are NOT retrieving users within our groups at all. :( In order to retrieve the users, we have to include the full path from our user groups to our firewall groups. (PAN: Nested User Groups in User-ID) In our case, this is: 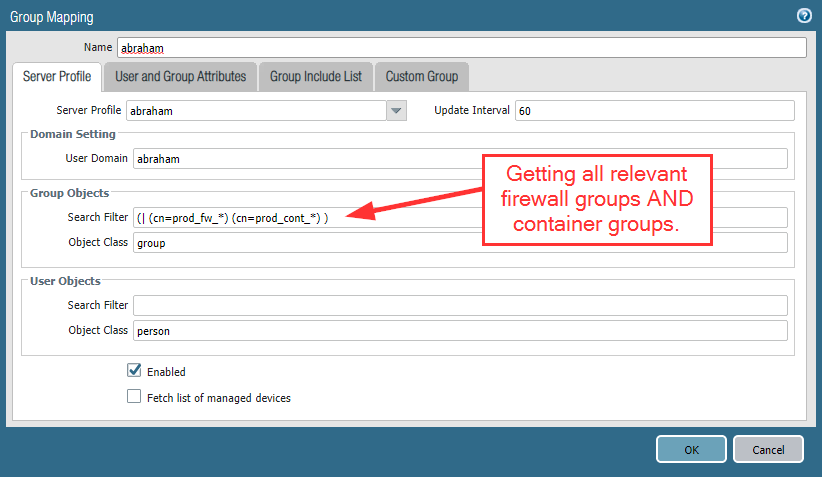 Doing it that way, we now have all users listed within our firewall groups. Good so far. BUT:

Using about 2000 firewall groups in our PA-5220 (distributed among several VSYSes), we now need about 10000 groups to sync into the Palo for our users to belong to the right groups. This brings us to the hardware limit. :(

The key question is: Why is Palo Alto, read: the LDAP implementation, not able to crawl the users within nested groups without having to retrieve all intermediary groups?!?

We googled a lot, opened a support ticket and had several discussions with colleagues and Palo SEs. Along with packet captures and Wireshark deep dives to understand how the LDAP queries are working. ;) Here are a couple of ideas that are all not feasible for us:

In the end, the support from PAN told us to ask for a feature request. Hm. Obviously, they are not accepting it as a bug, though engineering confirmed it…

Are we the only ones running into this?

Again, I am highly interested in how you are using groups in your AD and within your Palo policies. How do you remain below the threshold of user groups? –> Please write a comment below!

Photo by Jonathan Ford on Unsplash.