I configured a static Site-to-Site IPsec VPN tunnel between the Cisco ASA firewall and the Palo Alto next-generation firewall. If the same phase 1 & 2 parameters are used and the correct Proxy IDs are entered, the VPN works without any problems though the ASA uses a policy-based VPN while the PA implements a route-based VPN.

I made a few screenshots from the VPN configuration of both firewalls which I will show here. I am also listing a few more hints corresponding to these two firewalls.

This tutorial is outdated! Please use this one which leverages route-based VPN, IKEv2, and better security algorithms.
This is one of many VPN tutorials on my blog. –> Have a look at this full list. <–

Note that I am not showing the creation of the phase 1 & 2 parameters since I named them accordingly to their types. I am always using AES-256, SHA-1, DH-5, and a lifetime of 28800 seconds for IKE and 3600 seconds for IPsec. The IPsec protocol is ESP.

Finally, remember that the Palo Alto needs a permit policy entry on the untrust zone in order to allow incoming/outgoing packets for ike (500) and ipsec-esp. That is, “from untrust to untrust”. Refer to the traffic log and search for deny statements if the VPN does not establish.

The creation of the policy-based Site-to-Site VPN on the ASA contains the following steps: Group Policy and Connection Profile. These two steps will create the complete Crypto Map entry as well, which I will show for the sake of completeness, too:

If the VPN creation was successful, the Palo Alto has two sessions in its Session Browser. One for ike and on for ipsec-esp:

Furthermore, the green bubbles on the IPsec Tunnels pane turn into green: 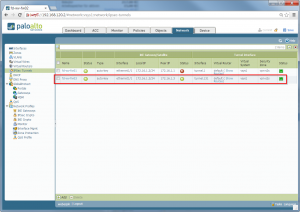 However, I noticed that the connection was *sometimes* recognized as “ciscovpn” and then denied by my cleanup rule. Note that the port “500” is always the same, while the application changes: 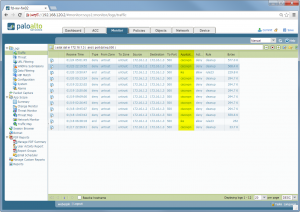 Therefore, I modified the untrust-untrust policy to also allow “ciscovpn”. (Which one more time produced these annoying dependency warnings which are not useful in this case!): 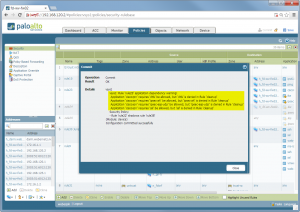 On the Cisco ASA, the VPN sessions monitor shows the established VPN with the appropriate parameters: 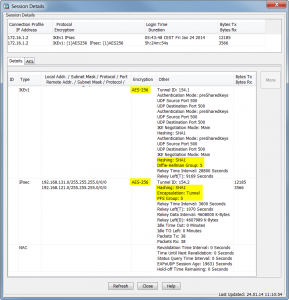