With global IPv6 routing, every single host has its own global unicast IPv6 address (GUA). No NAT anymore. No dirty tricks between hosts and routers. Great. Security is made merely by firewalls and policies. Site-to-site VPNs between partners can be build without address conflicts. Great again!

However, one problem to consider is the proper IPv6 routing via site-to-site VPNs since both sides now can reach each other even without a VPN. This was (mostly) not true with IPv4 in which both partners heavily relied on private RFC 1918 addresses that were not routable in the Internet. If specific IPv6 traffic should flow through a VPN but does actually traverse the Internet, it would be easy for a hacker to eavesdrop this traffic, leading to a security issue!

The following principles should be realized properly to assure that IPv6 traffic is never routed through the mere Internet when a site-to-site VPN tunnel is in place. Even in a failure of that tunnel. The principles can be applied to any IPv6 tunnels between partners, remote sites, home offices, etc., as long as the other site has its own global unicast IPv6 address space. (For VPNs in which a sub-prefix from the headquarters prefix is routed to a remote site, the situation behaves different. This article focuses on the routing between different IPv6 adress spaces.)

On both sites of the VPN tunnel, the following steps must be accomplished:

The following paragraphs show an example of these principles with two Juniper ScreenOS firewalls. I used a site-to-site VPN that is established over IPv4 but routes IPv6 traffic. This is the lab: 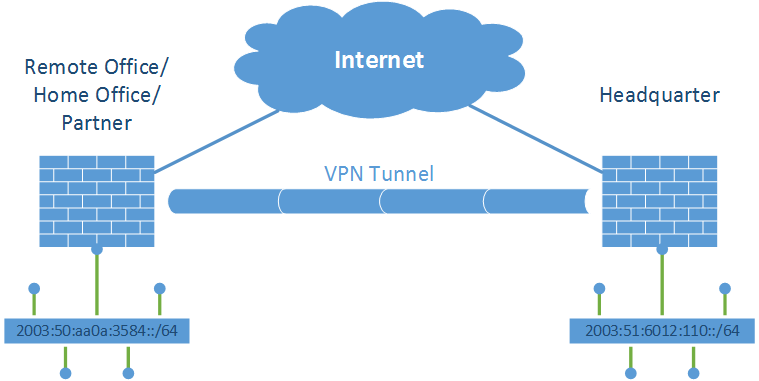 A route lookup to the destination IPv6 address on the router/firewall looks like that: It uses the default route (in my case through interface eth0/0):

Now, a site-to-site VPN between the two firewalls is established. The following screenshots document the static routes and policies on both Juniper SSG firewalls:

Now, the same traceroute command reveals the route through the encrypted VPN tunnel. (The second hop is not answering, because I am only using link-local IPv6 addresses on the tunnel interfaces):

The routing table lookup on the firewall on the remote site now shows the usage of the tunnel interface:

In this example, the VPN could not establish a connection. But due to the permanent route, traffic is not exposed in the Internet since it is still routed to the tunnel interface. Of course, the connections did not work. (Tested from the remote site.) 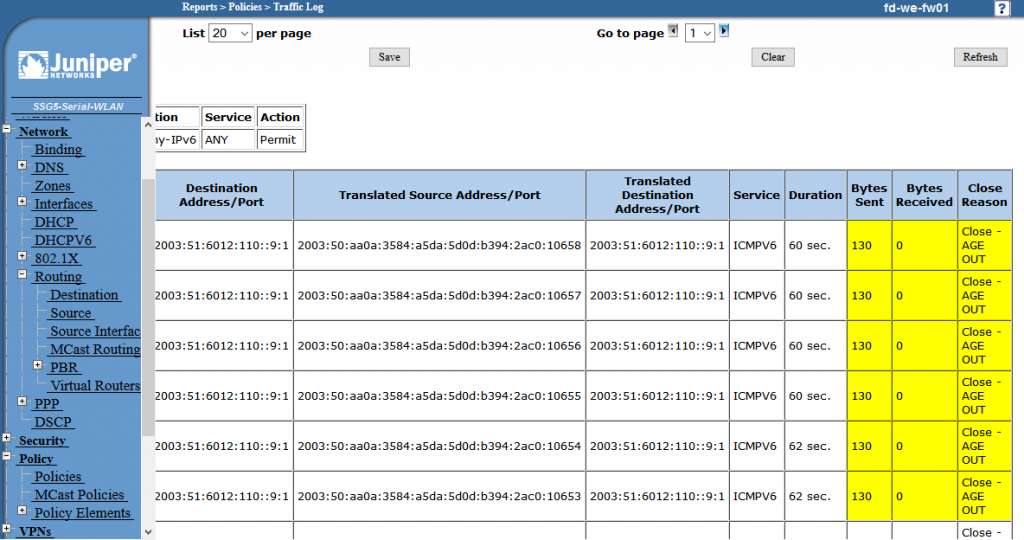 In this example someone misconfigured the routing table and deleted the specific route through the VPN. No traffic traverses the Internet because of principle number three, which still has the “deny” policy from trust -> untrust. (Tested from the remote site.) 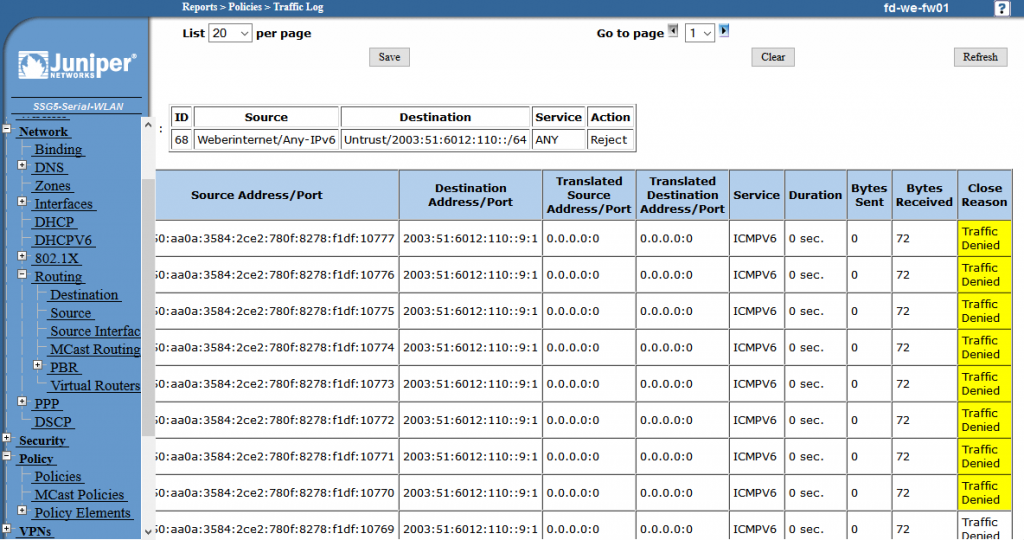 In this example, the route and all policies on the remote site were deleted. Now the connection worked until the headquarter firewall through the Internet, but was blocked there due to principle 2 and 4:

Principle 2 (uRPF) on the headquarter worked, because it did not expect traffic from the remote site’s IPv6 subnet from the untrust interface, and therefore blocked it: 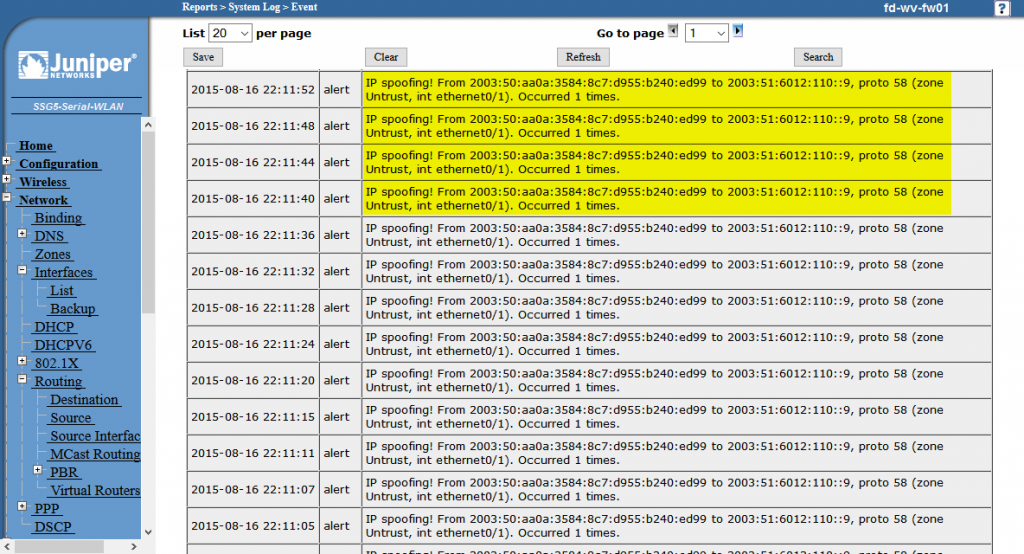 But even after I deleted the route on the headquarter firewall into the remote site (uRPF won’t block connections anymore), the connections were blocked due to principle number 4, which is the untrust -> trust DENY policy: 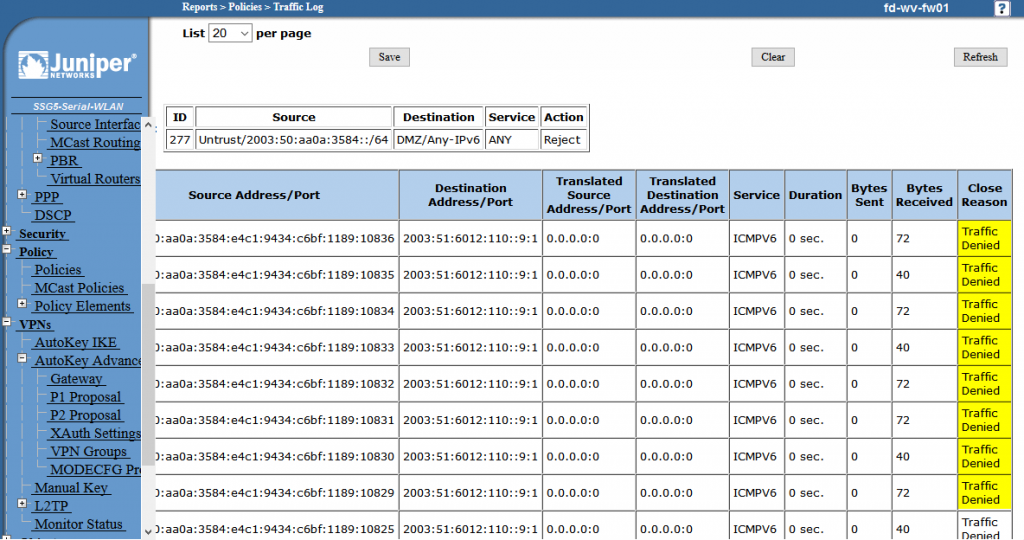 With these four principles/recommendations it is possible to ensure that IPv6 traffic which should only traverse through a secure VPN connection won’t ever traverse through the Internet, even in case of a VPN failure. They furthermore ensure, that security is not made only at the network layer (routing), but at a firewall stage (policy).

Featured image “In die Röhren geschaut” by 5auge is licensed under CC BY-NC-ND 2.0.