Maybe you’ve heard of Certificate Transparency and its log. Citing Wikipedia: “Certificate Transparency (CT) is an Internet security standard and open source framework for monitoring and auditing digital certificates.” Basically, it gives you information about any public certificate that is issued. Besides its advantages, I thought of one possible problem as it leaks all FQDNs to the public when using TLS certificates, for example from Let’s Encrypt.

A similar problem might arise when using a single X.509 certificate with a couple of DNS names (subject alternative name SAN) from which one should be kept “private”. It will be publicly known as well.

Hence I made a self-experiment in which I generated two certificates with random names, monitoring the authoritative DNS servers as well as the IPv6 addresses of those names in order to check who is resolving/connecting to otherwise unknown hostnames. Here we go:

TL;DR: Over a test period of 8 months my (1) completely hidden FQDN was resolved by DNS queries about 700 times, while 73 IPv6 HTTPS connections came in. My (2) second FQDN (SAN on my blog) was queried about 500 times, while 273 IPv6 connections came in, split into port 80 and 443. That is: Both completely unused hostnames are “leaked” and scanned by the public, just by using X.509 certificates!

As both certificates were issued by Let’s Encrypt, their validity expired after 90 days.

Since I am controlling the authoritative DNS servers for *.ib.weberdns.de (Infoblox VMs with query logging enabled) as well as the IPv6 space 2001:470:765b::/64 (a HE tunnel broker connection through my Palo Alto Networks firewall) I was able to catch every single DNS query and IP connection attempt. ;) However, all connections were blocked completely. No service was listening on those IPv6 addresses at all.

Many DNS Queries and IP Connections

After the two certificates were issued, I put the second one (with the SAN) on my blog. For both hostnames, I saw a couple of DNS requests on the DNS servers immediately. As well as incoming connections to the IPv6 addresses:

Here is a screenshot from the Palo Alto, showing the two blocking rules and their hits:

Note that I did *only* analyze incoming IPv6 connections. Yes, this is not optimal, but it is 100 % likely that all those attempts came from explicit stations querying my hostnames rather than normal port scans. (Port scans to random IPv6 addresses are unlikely as the host ID space in a /64 is 2^64. Refer to my post about the Internet’s Noise.) 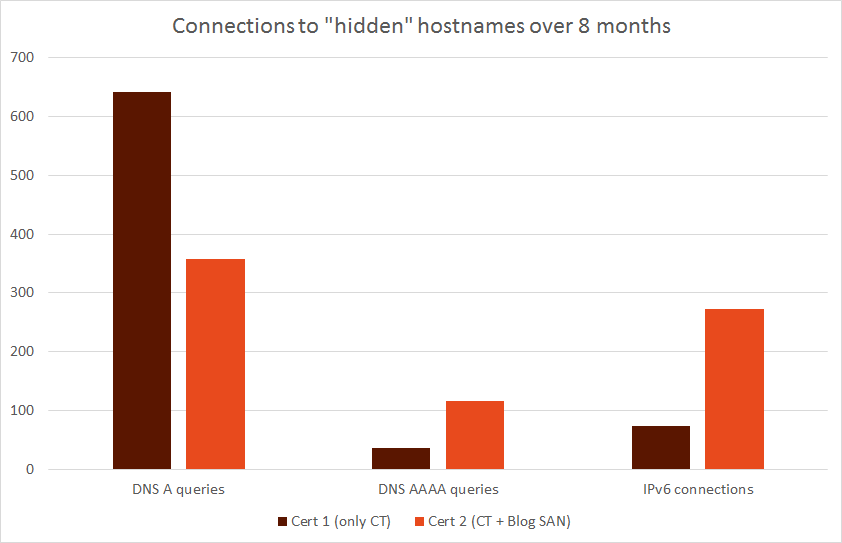 I grepped through the log files from the authoritative DNS servers as well as from the firewall. As expected, there are hundreds of connection attempts to both hostnames:

While the first FQDN got more DNS queries, the second one received much more connection attempts.

I have not looked into every single IPv6 source address, but there seem to be some interesting ones. Of course, it’s Google. And quite often DigitalOcean which probably only hosts some kind of stuff? (Does anyone know where Let’s Encrypt itself is hosted?) Furthermore, at least one Tor exit node is present according to the whois search. And Technische Universitaet Muenchen querying the CAA records of the hostname just a few seconds after it appeared in the CT log. Probably some research going on here? Same for Cloudflare, which only queried the CAA record.

As always, you could do so much more with this data. At first, drawing some more nice graphs to have an easier understanding of the data than the raw values. ;) But also some more analysis such as:

Don’t expect that you can receive valid X.509 certificates on the Internet for private use cases. Every single FQDN is immediately publicized in the CT logs and will be scanned! Keep that in mind.

My analysis used only IPv6 addresses behind those hostnames. Since the query rate for A records was much higher, it is likely that there are a couple of hundred connection attempts for every hostname that ever appeared in the public CT logs or that is just a subject alternative name on a publicly used certificate.

If you want to have a look at the raw logs, here we go:

I used the following shell commands for my analysis (refer to Logfile Parsing):

Photo by AbsolutVision on Unsplash.