I am participating in the NTP Pool Project with at least one NTP server at a time. Of course, I am monitoring the count of NTP clients that are accessing my servers with some RRDtool graphs. ;) I was totally surprised that I got quite high peaks for a couple of minutes whenever one of the servers was in the DNS while the overall rate did grow really slowly. I am still not quite sure why this is the case.

For one month I also logged all source IP addresses to gain some more details about its usage. Let’s have a look at some stats:

NTP servers are only used by the round-robin DNS of the pool if they have a score higher than 10. But there are some concerns about this scoring. “Points are deducted if the server can’t be reached or if the time offset is more than 100ms (as measured from the monitoring systems).” More specific: “The monitoring system works roughly like an SNTP (RFC 2030) client, so it is more susceptible by random network latencies between the server and the monitoring system than a regular ntpd server would be.”

In fact, almost once a day my scores drop dramatically, sometimes even below a score of 0, while my NTP servers are fully functional from my point of view. Here’s an example from my server ntp5. The yellow dots (offset) are increasing regularly, while the score dropped between 14-23 o’clock on April 1st, 2019:

Now, this was my point of view from my monitoring station. [Ref: Basic NTP Server Monitoring] Neither the jitter (measured in µs rather than ms!) nor the offset (in ms) had any issues. April 1st, 2019 on the left-hand side of the graphs:

This seems to be related to some routing behavior from Los Angeles (the location of the NTP monitoring station) to my network (DTAG, AS3320). Or generic network congestion. I don’t know.

That is: My overall experience with this score is mixed. To my mind, it is not reliable and should be replaced by a more profound one. Note that this discussion is not new, refer to some threads on the pool mailing list: “Why is my server score suddenly so poor?” or “Decentralised monitoring?“.

At first here is a weekly graph from one of my servers (ntp5) which shows the normal case all over the time. That is: High peaks (up to 30 k), but only for a very small amount of time:

I am wondering why there are so many NTP clients that are querying the servers only *once* at the time the IP address is listed in the DNS. I expected that NTP clients are resolving the DNS and staying on those IP addresses until the next service restart or system reboot. But obviously, they don’t. Any ideas? Bad implementations such as explained here: “How to NOT use the NTP Pool“? 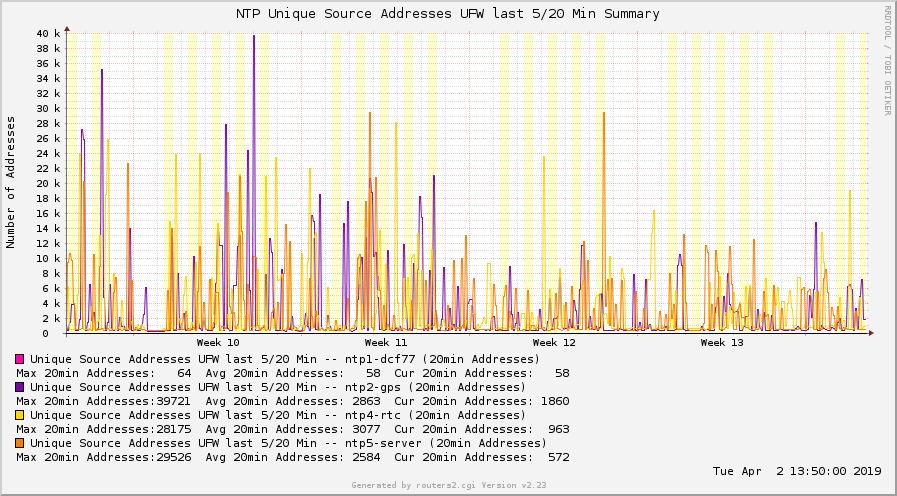 I have logged all incoming connections through my FortiGate FG-100D firewall to an external syslog-ng server. Hence I could cat ‘n grep through the raw logfiles from this whole month.

Some more details with the values per month:

Here are the top 10 queries per second timestamps from one server (ntp2). As you can see, it’s only the top 10 which exceeds the 1000 queries/s rate:

Here’s another analysis. How often do I see how many requests/s. First column: counts per month, second column: queries/s. Listing from ntp2. That is: The vast majority is below 10 queries/s. For example, line 11 reads: 829x per month the server got 10 requests per second. To my mind, that’s not that much.

This is how I grepped:

Requests after Leaving the Pool

I had to move my lab to another location with new IPv6 addresses. Hence I had to delete my servers since they are referenced by IP addresses rather than DNS names in the pool.

This is the NTP clients graph (zoomed in) for the first six days after I left the pool: 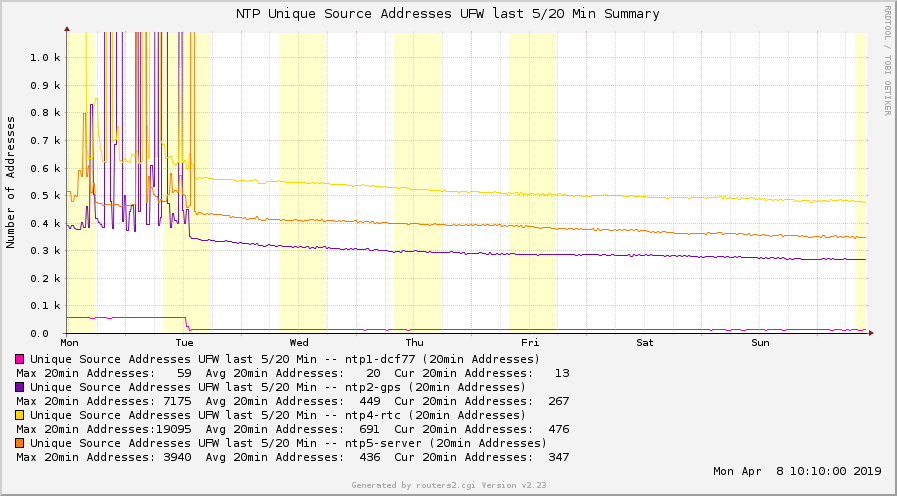 Clients are decreasing while there are still a couple of hundreds that are constantly using my server. Again, from a technical perspective I was expecting even many more clients using it constantly. I thought that once an NTP client queries the DNS name of the pool it stays on those resolved IP addresses until a reboot of the system. But obviously, this isn’t the case for the majority of clients. One idea: Maybe these clients use ntpdate rather than ntpd which is called every hour via cronjob? In this case, each run would initiate a new DNS query rather than staying on the same NTP server. But that’s just an idea. I have no clue what’s going on there.

Featured image “Hourglass with coins” by Marco Verch is licensed under CC BY 2.0.

2 thoughts on “Stats from Participating the NTP Pool Project”