… since we all can use pool.ntp.org ? Easy answer: Many modern (security) techniques rely on accurate time. Certificate validation, two-factor authentication, backup auto-deletion, logs generation, and many more. Meanwhile, we use an unauthenticated protocol (via stateless UDP) from unauthenticated sources (NTP pool) to rely on! Really?

TL;DR: If you want to operate a secure environment you should use your own on-site stratum 1 NTP servers along with authentication. This is the only way to eliminate time spoofing attacks from the outside. Don’t reduce your overall security to a stateless and unauthenticated (read: easy-to-spoof) network protocol!

If you are using a couple of different NTP sources it might be not that easy for an attacker to spoof your time – though not unfeasible at all. And think about small routers with VPN endpoints and DNSSEC resolving enabled, or IoT devices such as cameras or door openers – they don’t even have a real-time clock with battery inside. They fully rely on NTP.

This is what this blogpost series is all about. Let’s dig into it. ;)

Why am I starting a long series about NTP? Because I have many customers and colleagues that are way too lazy when it comes to NTP. “It’s working with some servers on the Internet, so why should I care?”

Because almost everything in secure environments relates to timestamps. If the time isn’t contributed precisely all over your enterprise you will run into different kind of errors or security failures or troubleshooting burdens. Do not miss NTP as it might be the weakest link in your overall security strategy.

“How about you set the time on your server ahead by 5 years. Got any idea what would happen?

Until recently, setting your iPhone to 1 Jan 1970 would brick it. I’m sure there are many more examples, but likely you can no longer log in, via SSH or HTTPS, and your iPhone is dead. I think any of those would qualify as more than an annoyance.”

Want some more resources? Have a look at this paper: Bypassing HTTP Strict Transport Security [PDF] which almost only leverages a man-in-the-middle tool for NTP. Uh. Or this one: “The most common cause for secure connection errors turns out to be user systems having the wrong time“, Panos Astithas at Feeling safer online with Firefox.

And something from Geoff Huston: “What can we say about time and the Internet? The safest assumption is that most systems will be in sync with a UTC reference clock source as long as the definition of “in sync” is a window of 24 hours! If the ‘correct’ behaviour of an Internet application relies on a tighter level of time convergence with UTC time than this rather large window, then it’s likely that a set of clients will fall outside of the application’s view of what’s acceptable“, at APNIC Labs – What’s the Time?.

Got a first hand experience on how critical NTP is today. A cluster farm had a couple machines get the wrong NTP data, whole thing went down because the clustering was so complex we just had to wait it out. 4 hours of down time due to a small NTP data packet corruption…

And what about the Internet of Things? IoT devices merely rely on NTP since they don’t have a built-in battery-powered real-time clock. That is: After booting they don’t have a time at all until they get one over NTP. Spoofing the NTP servers or packets would immediately mess up their time.

And one more example out of a networker’s daily business: Taking multipoint packet captures without synchronized times is a nightmare! You have to sync the time on your capture devices to have a chance to find your relevant packets all over your traces. Same for log messages: You need synced timestamps all over your network for accurate log correlation.

What to do? Usage of own Servers & Authentication!

You should use three on-site NTP servers as well as NTP authentication. That is:

Using unknown NTP sources on the Internet opens at least two attack vectors: 1) The NTP source itself could deliver invalid timestamps while 2) the UDP packets could be spoofed on the way through the Internet. Using your own servers with NTP authentication thwarts both vectors.

For this blogpost series, I primarily used a couple of Raspberry Pis. Simply because they are cheap, have small power consumption, and you can easily use the IO ports to connect other devices such as a GPS or DCF77 receiver modules. Works fine. However: You should NOT rely on those Pis in your production environment. Why? Because they don’t have a real-time clock which keeps their own time accurate. Hence they merely rely on their stratum 0 input. If this signal is lost, you will drift in time! Furthermore, they are not stable at all, hard to update (as you will see during my series) and everything needs to be configured by hand. Hence: Only use dedicated NTP appliances that are made to serve precise timestamps all over your network. For my posts, I am additionally using a Meinberg LANTIME M-200 device which I am comparing to the Pis at some points.

This blogpost series is split into three parts:

Have a look at this page which lists all post in a structured order.

All posts are related to my three IPv6-only stratum 1 NTP servers:

Feel free to use them via ntp.weberlab.de only. This FQDN will list only the IP addresses of those servers that are available. Of course you should only use them for test purposes, NOT for your enterprise, as this article is all about running your own servers. ;) 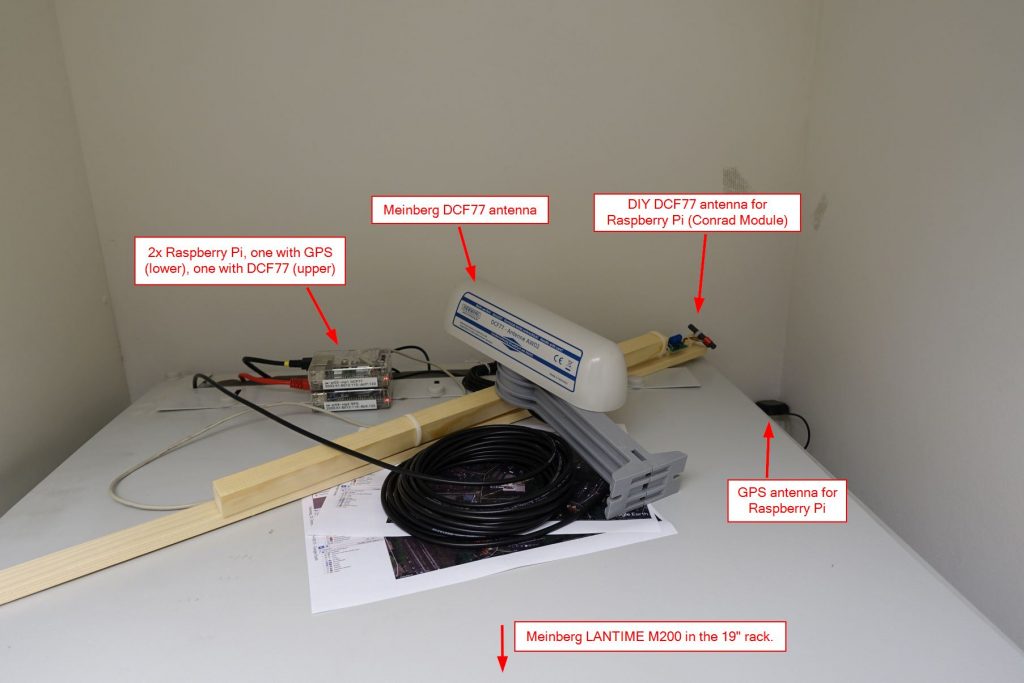 Throughout this series, I am only covering NTP but not PTP (Precision Time Protocol). Furthermore, I am not attacking NTP via MITM attacks (at least not now) but only show how to prevent them with NTP authentication, nor do I attack the external time sources DCF77 or GPS. And I am not diving into DDoS attacks that use NTP servers (reflection & amplification attack) since I assume that you’ll primarily use your servers only within your own network and not on the public Internet.

As always you can read even more. ;) If you’re interested in the deep details about the network time protocol itself you should have a look at the Internet Protocol Journal volume 15, number 4 [PDF] and its article “Protocol Basics: The Network Time Protocol” from Geoff Huston. You should also have a look at this Recent NTP papers website with some really deep dive papers about NTP. Wow. For example this one: Challenges in Time Transfer using the Network Time Protocol (NTP).

Anyway, here are some more links:

As well as security-related stuff:

I am not set against the NTP pool project in general. It is a great community-driven project that I am using client-side (for many small devices such as routers, Raspberry Pis, IoT, …) as well as server-side since I am contributing with at least one online NTP server. However, my focus on this blogpost series is the enterprise network. And you should not use the NTP pool within your enterprise as at all, but own independent stratum 1 NTP appliances along with NTP authentication.

17 thoughts on “Why should I run own NTP Servers?”